Run in a natural environment, discover the most hidden paths in the mountains, in the woods, on the plains or in the hills. It is the trail running, the race that runs on mostly dirt tracks and which involves overcoming both positive and negative gradients. Trail running has been recognized as a discipline of athletics in 2015 for the 50th Iaaf competition. Trail running races of less than 42 kilometers are defined as "trails" and are characterized by differences in level close to 3000 meters. The most demanding races are called ultra trails if they exceed 42 km: the Tor des Geants, for example, is a race that winds through 7 sectors for a total of 331 km and more than 20 thousand meters in altitude (positive and negative). To deal with these bumps, you need equipment at height, starting with shoes specifically to study for trail running. 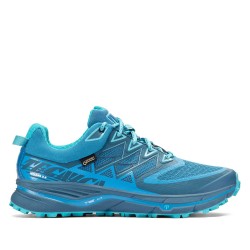 The trail running shoes have protective soles, able to absorb the strongest shocks, and a reinforced toecap to protect the big toe and the other fingers in case of impact with obstacles that on uneven ground are the order of the day. The sole of trail running shoes is designed to have as much grip as possible, through grooves that allow you to climb every surface and do not slip in wet sections. The upper of trail shoes is often waterproof and protects the foot from mud, rain and snow. Often breathable and waterproof fabrics such as Gore Tex are used. All these tricks make trail running shoes a little heavier than ordinary running shoes. After all, those who love rough roads know how important versatile and safe shoes are.